With the increasing costs of energy and other operating expenses, there is increasing pressure to begin to monitor, manage, and reduce the use of energy in our automobiles, transit systems, buildings, and homes.

The 2015 U.S. Open golf tournament was held at the Chambers Bay Golf course in Pierce County Washington, just outside of Tacoma, during the week of June 15, 2015. For the golfers, the course was frustrating due to turf and green conditions. This portion of Washington State experienced a much hotter than normal May and June, which caused the grass on the course to suffer. The course itself is challenging under the best of conditions but with the turf conditions during the U.S. Open this year, particularly on the greens, it became unpredictable even for professional golfers. Most people who viewed the event were adequately entertained, and the results were as much about luck as skill—perhaps as it should be. 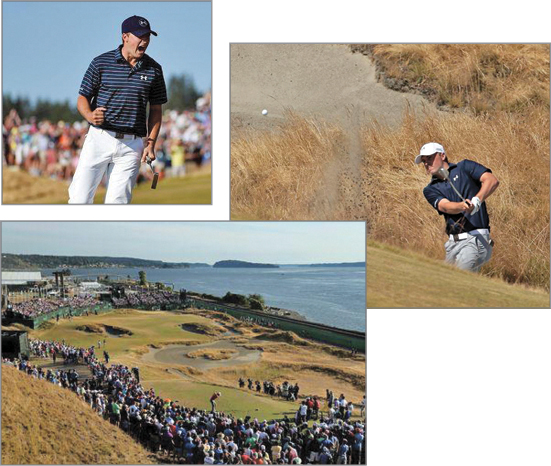 For an event like the U.S. Open that is broadcast nationally and internationally and draws about 40,000 golf enthusiasts daily to watch the professional golfers compete, security is a significant concern. The Professional Golf Association (PGA) hosts the U.S. Open each year and is ultimately responsible for all aspects of the venue. The U.S. Open in one of PGA’s tournaments that moves from course to course year after year. The PGA provides security for the course by contracting with organizations that have responsibility for checking that everyone on the course has the right to be there—either that they have purchased a ticket, are a player, or are a volunteer assisting in the myriad of tasks that need to be accomplished to make the event safe and successful. This year, everyone entering the course had to have a badge scanned at the entry gate and had to go through security similar to an airport screening. Local law enforcement along with several federal law enforcement agencies provided physical security during the event.

The Solution
As part of this security, video surveillance was provided by the Department of Homeland Security (DHS) in cooperation with Pierce County and Airship Industries, Inc. (Airship). Airship provided video cameras, software, and digital recorders, and established two “video walls” in the command centers that were set up specifically to service the one-week U.S. Open venue. Spatial Systems Associates, Inc. (SSA) was asked by Airship to provide integration of the video surveillance cameras with computerized mapping. Pierce County, an Esri customer, provided base mapping support and technical assistance to law enforcement in the command center.

SSA mapped approximately 45 cameras around the Chambers Bay course, including at entrance gates; remote parking areas; covering the adjacent railroad, beach and water areas; and inside various pavilions; as well as the totality of the course itself. Once the location of the cameras was determined and the cameras were providing live feeds, SSA visually determined what each of the cameras could “see.”

Approximately two-thirds of the cameras were pan/tilt/zoom (PTZ) devices that could be commanded on demand to point in any direction and at any desired zoom level. Polygons were established for each camera, along with the appropriate PTZ command string that needed to be fed to that camera for each polygon.

In the end, the entirety of the Chambers Bay course, many adjacent areas and the inside of pavilions was determined to be covered by the video surveillance system. Most areas were covered by multiple overlapping PTZ cameras. 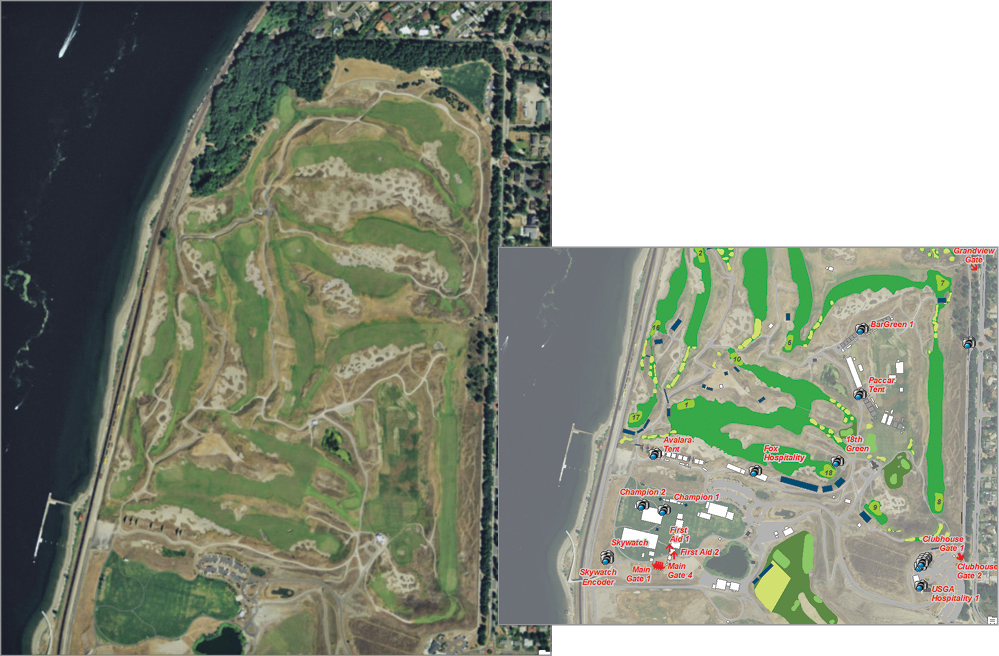 The command center operator, upon learning of an incident anywhere on the course, could point to that location on a map displayed on the video wall. The ArcGIS-integrated system would determine which cameras could “see” that location, and send appropriate commands through the Airship system to each appropriate camera. The cameras would turn as instructed, tilt to the appropriate angle, zoom in to the predetermined extent, and display their live feed on the video screen in the command center for use by all response personnel. The resulting system provided a means to significantly improve operational awareness of one or more incidents as they were unfolding, and assisted local law enforcement in determining how to respond. In addition, since the Airship system was continuously recording each camera, video evidence was available on an as-needed basis to determine when an incident occurred and provide video footage that could be used to provide information to the responding officers about what/who they should be looking for in the response.

The integrated system was used throughout the U.S. Open to assist in providing security for both the golfers and the fans. Whether you liked the results of the tournament or not, at least you can be secure in the knowledge that security forces and integrated video/GIS technology were being engaged to ensure your safety and the ability to enjoy the event.

For more information regarding how to effectively implement the integration of video surveillance and mapping technology, please contact Spatial Systems Associates, Inc.