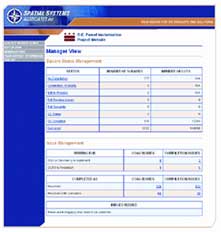 Description
Spatial Systems Associates (SSA) has provided GIS implementation and support services to several agencies within the Government of the District of Columbia over the period starting in 1998.

Spatial was responsible for development and implementation of a system for the Real Property Tax Administration (RPTA) to map all properties in DC and tie the map to available administrative and CAMA assessment file. The project involved scanning and registering of all property maps maintained by the Administration, and development of a set of property centroids tied to DC's assessment files. The effort included providing hardware, software, and the resulting data; and training of DC RPTA staff in the maintenance of the data.

Concurrently, SSA developed a vector version of the City's zoning boundaries based on the registered raster version of the property maps. The zoning layer was attributed with appropriate zoning classifications and provided to the Department of Zoning along with the data resulting from the RPTA effort.

SSA was then asked to provide custom programming and on-site support services to the DC Office of Planning (DCOP). We started with a needs analysis to assist DCOP management in understanding what GIS technology could do for them. The project included interviews with DCOP and other DC staff to understand the various requirements of the agency. Following completion of the study and presentation to DCOP management, a decision was made to move forward with several recommended initiatives. DCOP initially became the repository of GIS data within DC and provided an as-needed service to other agencies regarding the use of GIS technology for their benefit. SSA was contracted to provide on-site staff to develop custom applications and assist in providing these services, which we did for approximately five years.

As the use of GIS technology grew within DC, the overall responsibility of management of GIS was given to an office within the Office of the Chief Technology Officer (OCTO). SSA was awarded several tasks through OCTO to support GIS implementation in DC, including the complete vectorization of the cadastral theme based on the work that had been previously done for RPTA. The cadastral conversion effort utilized new digital orthophotography and CoOrdinate GeOmetry (COGO) tools to vectorize over 160,000 lots and tie the data to the RPTA. This data now forms the basis for continued GIS use throughout DC and is available to the public.