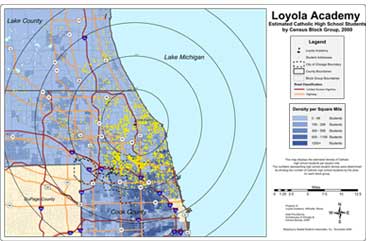 Description
Spatial Systems Associates was asked by Dominican University to assist in the analysis of data and production of cartographic product related to Loyola Academy in Wilmette, Illinois. Loyola Academy is a secondary school that was attempting to understand the dynamics of its changing demographics and student population. Loyola Academy draws students from a variety of "feeder" schools in the region. Loyola was interested in understanding where students were coming from and, using census data, the potential for being able to maintain student enrollment for the foreseeable future. This data would also be used to target marketing to certain neighborhoods. Spatial produced a series of map products that Dominican University incorporated into their report for Loyola Academy. Map products included:

This analysis and the resulting maps were used extensively in the report prepared by Dominican University dramatically assisted in the understanding of Loyola Academy management regarding the continued viability of the school.