The Challenge
In 2005, Spatial Systems Associates, Inc. (SSA), entered into a contract with Fairfax County Government’s Maintenance and Stormwater Management Division (MSMD) to assist in the development of their stormwater GIS data. MSMD is responsible for development and maintenance of the county’s stormwater conveyance system, including swale flow, culverts, pipes, stormwater management ponds, and other infrastructure.  MSMD is required to periodically inspect the water flow system, remove debris that would hinder operation, and provide ongoing maintenance to ensure continued operation.  Obstructed flow systems may allow flooding and are potential safety hazards. The following tasks were completed over the eight-phase life of the project:

The Solution
Easement Mapping
MSMD required SSA to complete the vectorization of their stormwater easements. The project was scoped as a geographically phased approach covering the 481 tax maps over a six year period. The easements were to be digitized using coordinate geometry information or surveyed coordinate information (direction, distance, angle, radii) found on plats. The plats were found through extensive easements record research in the Virginia state property records. All stormwater easements found were digitized. In addition to the vectorization task, SSA was also responsible for:

Website Development
To facilitate communication throughout the project, SSA developed a project management website using Esri’s Fairfax County, VA Stormwater Management ArcGIS server. The project website served as the organizational anchor for the project; it dictated the workflow of the project from document research and document QC through easement vectorization and QC, and finally the County’s acceptance. The County was able to communicate with the project team through this website and to monitor project progress. The website served as the central location for documenting decisions throughout the life of the project—much of which were made as a result of “issues” found during the project and resolved by the County through the website. The website allowed the County to easily observe project status and monitor quality of work. 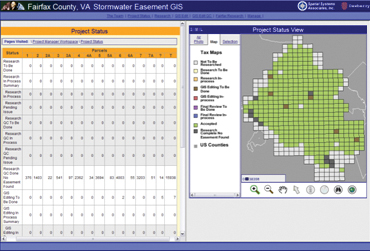 As-Built Plan Set Conversion
Due to the workload demand of the County’s MSMD staff, a backlog of as-builts containing stormwater infrastructure and walkways had resulted in a stormwater infrastructure dataset that was out-of-date. SSA was responsible for the conversion of the data found on the as-built plan sets. All stormwater information found on the document was included in the conversion process, essentially building a GIS as-built of the stormwater conveyance system. Similar to past projects between SSA and MSMD, the creation of the stormwater features from as-builts was a collaborative approach. SSA sought the County’s assistance when discrepancies in data or other issues occurred by creating an issue polygon/point in the website identifying the feature on the site plans that caused a concern or question. MSMD then provided the resolution to the issue. The issue polygon eventually came to contain the transactional correspondence between SSA and MSMD regarding the issue and was provided to the County for future reference. In total, 578 as-builts have been included in the various phases of the project.

Field Application Development
MSMD performs field visits to each stormwater structure in accordance with the National Pollutant Discharge Elimination System (NPDES) MS4 permitting program. All stormwater features/infrastructure within the 1,500 miles of the county stormwater conveyance system must be inspected during a recurring five-year cycle.

Previously, paper maps were marked-up during the inspection with changes necessary to the GIS data. These maps were susceptible to the environment (and spilled coffee) and did not serve as a sustainable archiving tool. In addition to marking up the paper maps, the field inspectors would take photographs documenting the condition of the structures. Upon their return from the field to the office, they would link the photos to the appropriate structure identification number which would result in the photo linking to the GIS features. This process was time-consuming and could potentially lead to error.

SSA developed an Esri-based field application that would replicate the crew’s existing collection process. SSA was intent on not changing the existing workflow, but replicating it in a digital environment. To accomplish this, SSA worked closely with MSMD through various meetings to gain a high-level understanding of how the toolset should work. Important to this was riding along with the field crew to get a true sense of what was being accomplished during the NPDES inspections. Prior to developing and deploying an application, it was important that Fairfax approved the key components of the toolset. To accomplish this, functional requirements were drafted to lay out the various aspects of the application and describe their basic functionality. This allowed MSMD to select exactly what components they felt were necessary and important in the field verification process.

The resulting GPS-enabled field application is a toolset that includes easy, one-click feature creation tools using large buttons with the feature type displayed. It also captures and associates field photos with the stormwater GIS features. The feature creation workflow simply involves selecting the feature from the toolbar and dropping it in the appropriate location in the map view. The application automatically handles basic editing functions and settings such as:

MSMD was prepared to take on the maintenance responsibility of the various stormwater tasks. As a result, training seminars were held and accompanying training documentation was issued to ensure the department can easily transition to internally maintaining the data. Two fourâï¿½ï¿½hour classroom training sessions took place to allow the department’s GIS team to work directly with SSA staff to ensure the correct workflows and techniques were adapted and to answer any questions regarding the overall process. MSMD has been successfully maintaining the data internally since 2011.